LESSONS FOR REFORMERS: HOW TO LAUNCH, IMPLEMENT AND SUSTAIN REGULATORY REFORM (2009) 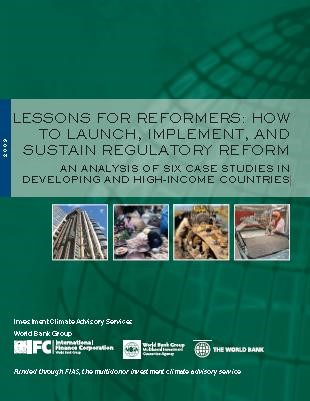 Scott Jacobs was lead author (June 2009) of this influential report for the IFC/World Bank, Washington. This report focuses on core aspects of the political economy of reform, drawing on case studies of three economies transitioning to stronger business environments (Hungary, the Republic of Korea, and Mexico) and three countries with well-developed business environments (Australia, Italy, and the United Kingdom). The purpose is first, to identify drivers of reform among successfully reforming countries; second, to explore how a reform strategy can make optimal use of the opportunities provided by the drivers of change; and third; to suggest how these lessons can be proactively used by other reformers to design and guide reforms.

Lessons for Reformers: How to Launch, Implement and Sustain Regulatory Reform was based on case studies prepared by experts that examined the dynamics of broad, ambitious programs of regulatory reform. The case studies can be downloaded below:

REGULATORY TRANSFORMATION IN THE REPUBLIC OF SOUTH KOREA